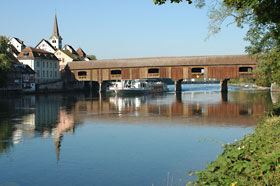 Historically, the Hegau also encompassed a large part of the present-day Swiss canton of Schaffhausen. Today, the distinctive landscape stretches from the western part of Lake Constance to the Swabian Alb, and reaches the Rhine and Switzerland in the south while bordering on the Danube in the north. The border with Schaffhausen, the only canton in Switzerland on the right bank of the Rhine, has had a major influence on the area, not just because of the local Alemannic dialect that resembles Swiss German. 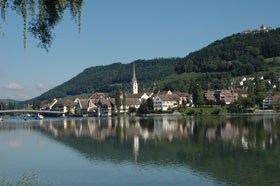 If you visit here, you must not forget to take your ID. Before you even notice it, you will suddenly be in the neighbouring country of the Helvetians. For example, if you go from Öhningen (D) by Stein am Rhein (CH) to Schaffhausen am Rheinfall (CH), you will cross the national border five times over the course of the 22km-long route, without seeing a single barrier or customs officer. The German exclave of Büsingen, on the right bank of the Rhine between Gailingen and Schaffhausen is even more international. The municipality with a population of about 1,500 has both a German and a Swiss postcode. The tax law is German but the locals pay for their shopping in Swiss francs.