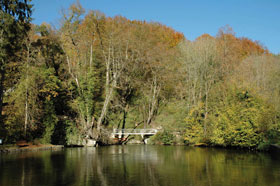 The Aach source is a natural phenomenon that is unique and shrouded in legend. It is the largest spring in Germany, rising to the surface in the medieval city of Aach. Part of the young Danube sinks into the riverbed between Immendingen and Möhringen, as it flows south through a dendritic system of caves, reappearing 12 kilometres later in Aachtopf as the Aach. The origins of the Aach's source remained a puzzle for quite some time. It was a secret that cave divers sought to explain with their daring and initially unsuccessful diving attempts in 1886. It was only recently that the source caves of the Aach were systematically studied and the findings documented in literature and film.

…and the Rhine waterfall 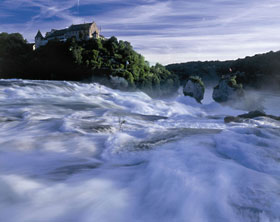 A little further south, crossing over the border by Schaffhausen into neighbouring Switzerland, you can experience the tremendous Rhine waterfall. Over a width of 150 metres, an average of approximately 600,000 litres of water crash down every second to a depth of 23 metres. A wooden viewing gallery was installed here as long ago as the late 17th century. Visitors can stand here and watch the thunderous spectacle from up close. Today, the biggest waterfall in Switzerland is visited by over two million people per year, making it one of the most popular day-trip destinations in Switzerland. Three panoramic paths take visitors so close to the falls that they are almost standing in the spray. The more adventurous visitors can even take a ship out to one of the rocks that emerges from the falls.